I am back again after months of dormancy to blog about something interesting and an easy to use mocking framework for .NET assemblies, that I have learnt and used very recently. It’s about the Microsoft Moles Framework that came out as a research project PEX in Microsoft.  PEX and Moles are available as an add-on for VS 2010. [However, with VS 2012, they are being replaced with Fakes and would be packaged along with VS 2012 ultimate version] So long I was aware of only doing an integration unit testing by executing the entire method to be tested by just doing a data setup and validate the actual and expected result upon execution of the test. The project I work currently doesn’t support this, as the code interacts with a lot of third party modules for which there are no testable APIs available. That’s when I got to learn about this Moles. This post is just about the introduction and various basic concepts around Moles framework which one should be aware before jumpstarting Moles usage in the Unit tests.

What is Moles Framework?

Moles is a mocking framework for isolation unit testing, with which you can mock any static, sealed/non-sealed, public/private/protected methods, properties, events, and de-tour method calls to perform isolation unit testing.  For example, if the method being tested is dependent on methods from external assemblies or built in framework assemblies, it gets tougher to test your piece of code in isolation. Moles give us a helping hand in such situation to mock all other external dependent entities and isolate your code alone to be tested.

Stubs -> Stubs can be used on interfaces, abstract classes, non-sealed classes which exposes virtual methods. Stubs rewrite the methods by virtual method overriding. The stubbed type will be named as follows “S<StubbedType>” e.g., Class TestClass will be stubbed to STestClass

Moles -> Moles can be used on static classes, and methods and classes from external assemblies where you don’t have control. Moles use CLR profiler and do the run time instrumentation. Test methods which uses Moles run under a separate Moles process “Microsoft.Moles.vsHost.x86.exe*32“. The moled type will be named as follows “M<MoledType>“e.g., Class TestClass will be moled to MTestClass

Sample screenshot of a Stubbed class below:

Important properties of Stubs to be aware of:

The table below shows the built in behaviors

However any custom behaviors can be created by implementing “IBehavior” interface present under “Microsoft.Moles.Framework.Behaviors” namespace.

Sample screenshot of a moled type:

A small tabular comparison and the recommendation of usage between Moles and Stubs, which I have come up with, based on my understanding of the moles framework is given below 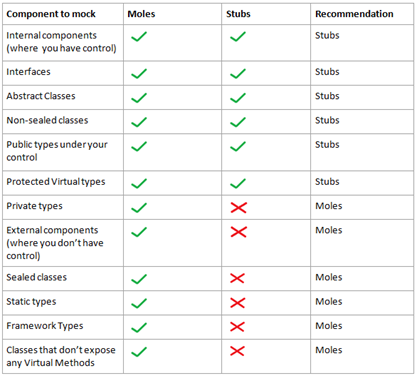 Per recommended best practices by Microsoft, use Stubs where ever it is possible and use Moles if and only if Stubs don’t help.

Getting started with Moles:

Moles framework for VS 2010 can be downloaded from visual studio gallery. Once installed, you will get “Add Moles Assembly” on right clicking any of the dlls (which you want to mole) under the references section of your project.This will add “<ReferencedAssembly>.Moles” xml file under your project. Building the unit test project will add “<ReferencedAssembly>.Moles dll” which gives the Stubs and Moles for all the types present in the dll. 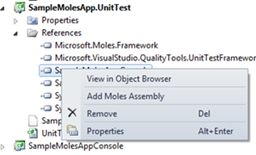 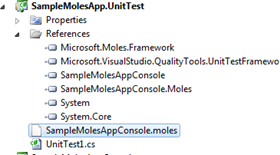 Moles will generate delegates (Func<T1…Tn, Tresult>) for all the methods with the method name suffixed with all the parameters it takes which can be used to mock the behavior. e.g. Mocking the Enterprise library 5.0’s Logging component’s write method, yielded a delegate for

as shown in screenshot below, to which you can attach any behavior you wish.

As a last and important note, remember always to attribute the test methods that contains the Moled implementation with HostType(“Moles”). as they all run under the process(“Microsoft.Moles.vsHost.x86.exe*32“), Failing this, would result in an exception as shown below being thrown

Moles requires tests to be IN an instrumented process.

Extensions are also available for most unit test frameworks. Please refer to the Moles manual.

That’s it; you are all set to mock the implementation of any method of your interest!!! Pretty easy isn’t it??

Glad that you had resisted yourself so much with the theory and reached till here 🙂 More code samples on using Moles and Stubs is underway and would be available very sooner in my next post.

Appreciate the reader’s comments and feedback to improve the blog further.

One thought on “Unit testing made easy with Moles – Part I”