In this post, we will see how we can add a class library project as a dependency to the console app we created in the previous post. DotNet CLI supports the below type of projects.

Here, we would be using the Lib project type.

Since the dotnet cli understands the project based on the folders, for us to have a class library project which a console app depends on, we need to create the following folder structures.

Navigate to the demoLibraryApp/library folder and run the below command

This would have created 2 files for you. Project.json and Library.cs. The project.json would look like the below one

I am taking the same example of DirectoryParser, so I have made the changes to Library.cs as below

Building the library project is as easy as running the dotnet build command. However, if you do that for the first time, without running a dotnet restore you would encounter the error as follows:

This is because, Project.lock.json helps the dotnet cli understand about all the dependencies a project is dependent on. Though we haven’t added any external Nuget Packages yet to this library project, it is vital to run dotnet restore first before triggering the dotnet build

Navigate to the demoLibraryApp\app folder and run the below command

Step 5: Adding the reference of library project to console app

Open the Project.json file present under demoLibraryApp\app folder and add the below lines of code after the Microsoft.NETCore.App dependency

Note : the property "target" : "project" tells the dotnet cli that “library” is a project dependency and needs to be restored from the local folder. DotNet CLI wouldn’t look at Nuget for restoring this dependency.

Step 6: Build and Run the project

Modify the Program.cs under the ConsoleApplication with the below set of lines to make use of the class and method present in the class library we just added.

We could also see that library.dll has been copied into the bin directory. 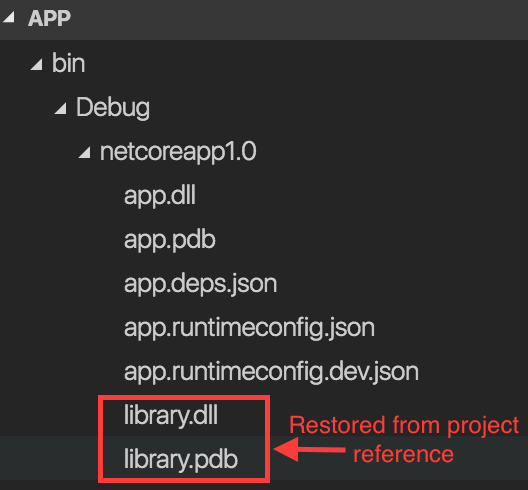 The name of the “dll” file is dependent on the folder name which contains the library project. Since I have used “library” folder to create the class library project, I have got the dll as library.dll.